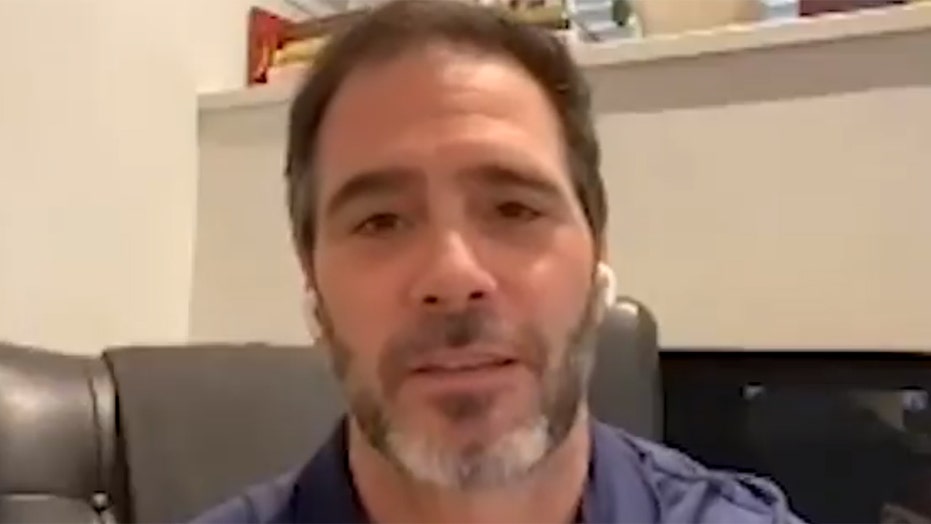 What is the NASCAR 'choose rule'?

Saturday night’s NASCAR race at Daytona could be Jimmie Johnson’s last at the fabled track, but he’s not ready to look in his career’s rearview mirror yet.

“I want to win a race so bad that that’s way more important to me than any type of reflection. I have years to reflect back,” he said during a media call on Friday.

The race is the last of the regular season, and Johnson’s final chance to make the playoffs and challenge for a record-setting eighth championship before he retires from full-time Cup Series racing at the end of the year.

Johnson, 48, hopes he and Byron, 24, can both make the playoffs. (Jared C. Tilton/Getty Images)

The Hendrick Motorsports driver is currently 15th place in the season standings and essentially battling with teammate William Byron and Matt DiBenedetto for one of the last spots in the post-season. He's hopeful he and Byron will prevail.

“For me, I feel like I’m racing more for my team. On top of that and an extension of that would be for the fans. I know where I am in my heart and I know that I’m still very, very competitive, can get the job done, win races and be a threat for the championship,” Johnson said.

Winning his first race since 2017 would get the job done, otherwise, it comes down to where they finish and if any of them win a stage during the 400-mile race. But anything can happen at a restrictor-plate track like Daytona, where he has won twice before.

“It could be a storybook ending for us, which would be amazing and I know the fans would really appreciate that and enjoy it. But all I can do is give 100 percent – that’s something that I’ve learned over these last three years that our performance on Sunday is more than just my will, my desire and how good I want to do. It’s really more of a team sport than I’ve ever imagined.”

The 42-year-old said he’s been trying to keep his mind off things by burning off nervous energy on his mountain bike.

“I’m excited, I’m ready to go. I’m not one to spend too much time getting overly sentimental. I’m more excited about the opportunity to go racing and drive that 48 car. So, I’m just excited to get there and get to work,” he said.

Regardless of how things turn out, Johnson said he definitely won’t be returning to NASCAR full-time next year, even after this very unusual season during which he tested positive for COVID-19 and missed the Brickyard 400.

“The farewell tour that I hoped to have, the interaction with fans and that sentimental experience – the pandemic got it. It’s an unfortunate truth, but it is what it is."