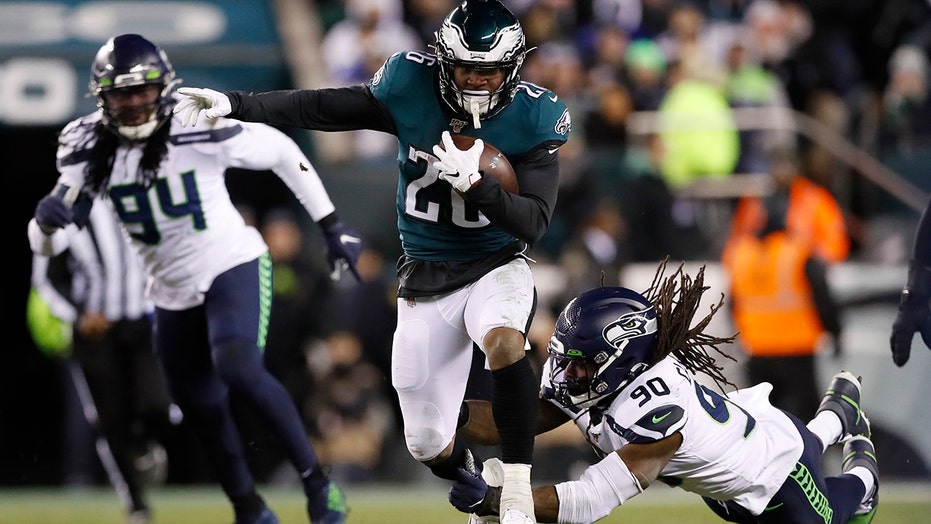 He’ll be the go-to guy in the backfield this year.

Sanders had 818 yards rushing and three touchdowns and caught 50 passes for 509 yards and three TDs for the NFC East champions.

After Howard left for Miami in free agency, the Eagles didn’t add a veteran back. The coaches believe they could lean on Sanders with Corey Clement and Boston Scott playing complementary roles.

“Miles can do it all,” assistant head coach Duce Staley said. “And when you have a guy like Miles that can make people miss, that can lower his shoulder and also run you over, you want to put the ball in his hands as much as possible and you trust him. I think that’s what we are.”

“He’s somebody that we’ve said, ‘Hey, you know, you’re our guy going into this season,’ " coach Doug Pederson said of Sanders. “Definitely want to increase what he can do for us, and if that means using him out of the backfield a little bit more in empty situations, we want to do that and see where he can grow and get better and help us.”

Here are six more rising stars in the NFL:

Jones led the NFL with 16 TDs rushing last season, ran for 1,084 yards, and caught 49 passes for 474 yards and three scores, helping the Green Bay Packers finish 13-3. Jones wasn’t picked for the Pro Bowl and didn’t receive one All-Pro vote at running back, but the 2017 fifth-round pick should have plenty of accolades in his future.

Selected by the Seattle Seahawks with the final pick in the second round of the 2019 draft, the wide receiver quickly made all the teams that passed on him regret their decisions. Metcalf had 58 catches for 900 yards and seven TDs in the regular season. Then he helped Seattle beat Philadelphia on the road in an NFC wild-card playoff game with seven receptions for 160 yards and one TD. Russell Wilson will be looking Metcalf’s way quite often in 2020.

Andrews isn’t mentioned yet with the elite tight ends in the NFL, but he led the Baltimore Ravens last year in receptions (64), yards receiving (852) and TD catches (10) in just his second season. He seems poised to join George Kittle, Travis Kelce, Zach Ertz and Rob Gronkowski among the upper tier players at his position.

A two-time Pro Bowl safety in his first three seasons, Baker already was rewarded by the Arizona Cardinals. The 24-year-old signed a $59 million, four-year contract extension last week. Baker has quickly become a young cornerstone for the Cardinals’ defense and led all NFL defensive backs with 147 tackles last season, including 104 solo tackles.

In just two seasons with the Indianapolis Colts, Leonard has won the NFL’s Defensive Rookie of the Year Award, been an All-Pro and made the Pro Bowl. Leonard is determined to be the best linebacker in the league and is fueled by any type of criticism he receives.

A fourth-round draft pick last year, Crosby led the Raiders with 10 sacks, forced four fumbles and outplayed teammate Clelin Ferrell, the No. 4 overall pick. New defensive line coach Rod Marinelli, one of the best in football, should help Crosby take his game to an even higher level.