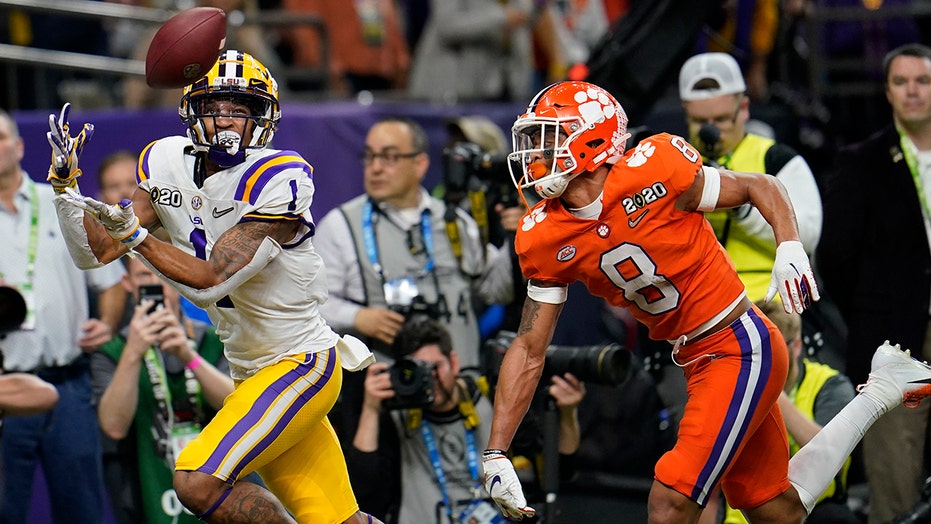 LSU knew all along it would have to try to defend its national title without Heisman Trophy-winning quarterback Joe Burrow and four other first-round draft picks.

It turns out they’re also missing a few notable players who weren’t in the most recent draft. All-America wide receiver Ja’Marr Chase, cornerback Kary Vincent Jr. and defensive end Neil Farrell Jr. have announced they won’t be playing this season.

“The competitor in me badly wants to play the season and go to war with my brothers, but during this time with so much going on, this is what’s best for my family,” Chase said Monday in a Twitter post announcing his decision.

Chase didn’t specifically say in the tweet that he would be entering the 2021 NFL draft, but he’s regarded as a likely first-round pick. He won the Biletnikoff Award as college football's top receiver and set Southeastern Conference records for touchdown catches (20) and yards receiving (1,780) last year.

Vincent said he was opting out to begin training for the draft, while Farrell said he plans to play for LSU in 2021.

These three guys from LSU aren’t the only notable college players opting out of this season as college football attempts to hold a season amid a pandemic.

Even before the Big Ten and Pac-12 announced they were postponing their seasons, two of the Big Ten’s top playmakers — Purdue’s Rondale Moore and Minnesota’s Rashod Bateman — had indicated they were opting out.

The Atlantic Coast Conference has been hit particularly hard. Four first-team Associated Press all-ACC players from last year have decided not to play this season.

Here’s a list of some notable players opting out. Although multiple reports have indicated Oklahoma running back Kennedy Brooks and Memphis running back Kenneth Gainwell have opted out, they’re not on this list because their schools haven’t confirmed whether they won’t be playing.

Farley earned first-team all-ACC honors, led the conference in passes defended (16) and tied for second in the league in interceptions (four) last season. Farley announced in late July that he wouldn’t play this season and would instead prepare for the 2021 NFL draft. Farley cited the “uncertain health conditions and regulations” while noting that his mother had died in January 2018. Virginia Tech still returns one starting cornerback from last season in Jermaine Waller. The Hokies also added Illinois State transfer Devin Taylor, who led the Missouri Valley Conference in pass breakups last year.

Johnson started all 12 games for Ole Miss at center and allowed only one sack in 377 pass blocks. Johnson announced Aug. 16 on Twitter that he was opting out of this season. Reports have surfaced since that Johnson has entered the transfer portal. Ben Brown, who started all 12 games at right guard last season, has been working out at center during the preseason with Johnson out.

Rousseau is sitting out this season to prepare for the draft after collecting 15 ½ sacks as a redshirt freshman last year to rank second among all Football Bowl Subdivision players, behind only Ohio State’s Chase Young. Rousseau said last month that his “mother is a nurse on the front lines and has first hand witnessed the horrors of this terrible pandemic and I want to ease their concerns.” Miami still should have a quality pass rush with UCLA transfer Jaelan Phillips and Temple transfer Quincy Roche, who produced 13 sacks for the Owls last season.

Surratt had accumulated 1,001 yards receiving to lead all Power Five players last year when he left the Virginia Tech game with an apparent shoulder injury that sidelined him for the remainder of the season. Surratt announced last month he would forgo the upcoming season and prepare for the draft “due to the many uncertainties and risks associated with COVID-19.” Surratt’s absence leaves Wake Forest without its top five receivers from last season as well as quarterback Jamie Newman, who transferred to Georgia.

Twyman had 12 ½ tackles for loss and 10 ½ sacks this season as he earned second-team Associated Press All-America honors. Twyman said last month his decision not to play this season and focus on the draft “isn’t about COVID-19, but about his family’s needs, now and in the future.” Even without Twyman, Pittsburgh should have a solid defensive line featuring seniors Keyshon Camp, Patrick Jones II and Rashad Weaver.

Wooten recorded 27 overall tackles and 4 ½ tackles for loss last season while earning plenty of playing time in a reserve role. In announcing that he wouldn’t play this season, Wooten said he will become a father in November and that his top priority is the safety of his family. “Unfortunately, playing this season was ultimately not a risk that I was wiling to take.” Wooten is planning to take a redshirt and play for Auburn in 2021. Auburn still appears to be in good shape at linebacker with K.J. Britt, Zakoby McClain and Owen Pappoe returning.