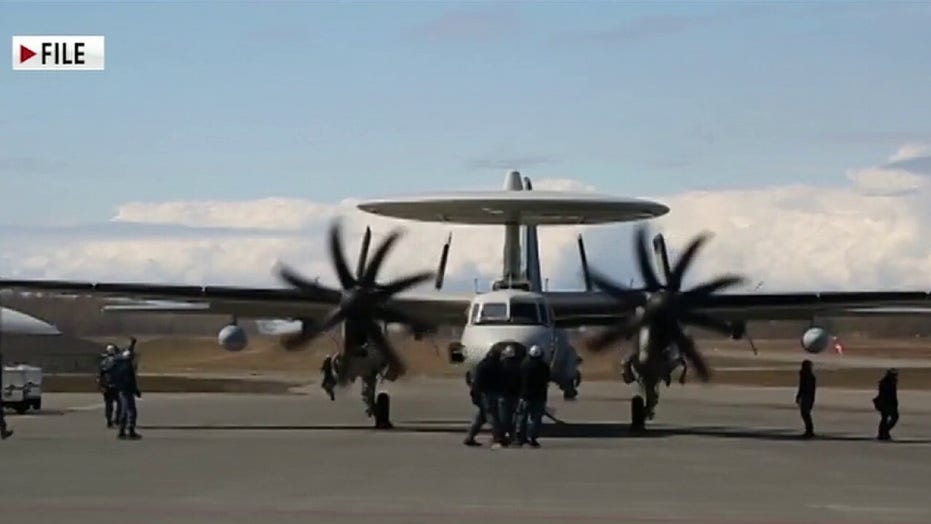 Pilots, crew bail out of Navy plane before crash in Virginia

All on board were able to safely exit aircraft; Lucas Tomlinson reports.

An E-2 Hawkeye Navy surveillance plane crashed in an open field on the Eastern Shore of Virginia on Monday afternoon, and everyone on board was able to bail out safely.

Two pilots and two crew members aboard the flight were conducting a training flight out of Naval Station Norfolk.

“The two pilots and two crew members bailed out of the aircraft safely through the main cabin door. At the time of the crash, the E-2 was conducting a training flight," said Cmdr. Jennifer Cragg, a Navy spokeswoman.

The Navy says the E-2 was from Airborne Command & Control Squadron (VAW) 120 Fleet Replacement Squadron was flying out of Norfolk when it crashed into a field on the Eastern Shore of Virginia near Wallops Island, where Navy aircraft practice carrier landings heading out to the boat.

It's located near Chincoteague, a wildlife refuge best known for its wild ponies.

It's not clear right now why the plane crashed. Officials say it's fortunate all four crew members were able to bail out and speaks to their flight training.

The E-2 doesn't have ejection seats so to bail out the crew has to get out of their seats with a heavy parachute strapped to their back and shuffle to the rear of the aircraft and jump out.

The crew is required to strap into their parachutes before taking off.

BIDEN TELLS NATIONAL GUARD: I'LL NEVER USE THE MILITARY AS 'A PROP'

The E-2 is a surveillance plane whose spinning radar dish spans 24-feet in diameter. It launches from aircraft carriers to be the "eyes in the sky" to detect enemy aircraft, relay communications and vector friendly aircraft.

The Navy says based on initial reports, no buildings or people on the ground were damaged or hurt in the crash.

Stephen Gardner, whose grandmother lives near the crash site, told WAVY that she heard a loud bang and “real big flames, probably bigger than a house.”

“When I got here, it was just black smoke,” he continued. “I’m happy no one got hurt, especially by the house, the houses here. So if it went down anywhere, this was a good spot.”

The cause of the crash is under investigation.